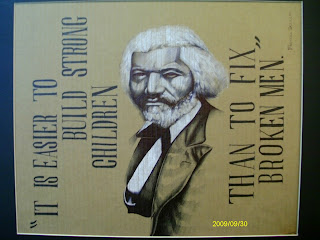 Back to work after being out for a week. It started to snow last Tues. and school was cancelled for Wed. I thought "Great, a day off!" That day off turned into a week. The temperature dropped to below zero and before we knew it our water pipes were frozen, electricity failed and gas was out in parts of the city. This city is known as the "Sun City", the city was ill prepared for the freeze. When the pipes began to thaw on Fri. there were burst water pipes all over the city. By Sunday night the water pressure was so low that there were still water shortages around the city.
We had a hard time here at home, we went without water and electricity which meant no heat for a while. We were freezing cold. I spent the time off creating new jewelry pieces and stocking up the shops where my jewelry sells. I'm finding it hard to prepare my mind to return to work and to top it off, I'm hearing that many schools have major damage and some of my art teacher friends have damage in their art rooms. I hope my room is ok. Guess I'll know by tomorrow.
The picture above was an entry for Black History Month. I havn't heard if my student placed or not in the competition, but either way I think it is a great piece. I'm having a hard time getting this student to take some risks, its obvious that he can draw, now I just want him to "play" and take chances with his work. Hopefully I can get him to experiment before the end of the year.
So, how many weeks till Spring Break?
Posted by Nena at 7:56 PM