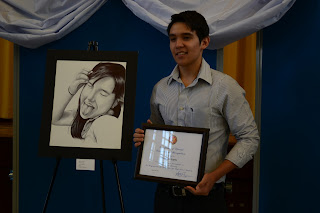 I am thrilled out of my mind at the moment.  My student has been awarded the Congressional Art Award this past weekend!  His work will hang in the Nation's Capitol Gallery for a year.  We have been invited to Washington D.C. for a week in the summer where we will be taking part in several ceremonies and tours.  From what I've been told, we will receive a tour of the Capitol by our own Congressman, Mr. S. Reyes.
If I'm over the moon, you could just imagine how my student feels.
I'm so glad he won, he is such a dedicated student and such a nice kid.
He drew a portrait of his sister using a ball point pen.  It looks like a photograph.  If you are ever in the Nation's Capitol, stop by and take a look.
Posted by Nena at 8:24 PM