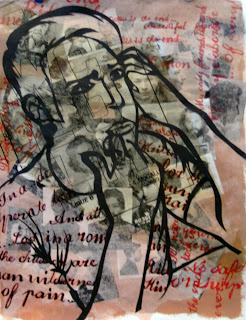 I usually give my adv art students the opportunity to come up with their own project ideas. They must be able to convince me, though, that they have a well thought out idea. They must also present their idea in their sketchbook first.I also want them to start thinking about a series of pieces that can be viewed as a cohesive portfolio when done.
The majority of my adv students are working on independent pieces. I give a starting project to those that have trouble thinking of an assignment, but my goal is to get them to think for themselves. I acknowledge, though, that I have a long way to go. 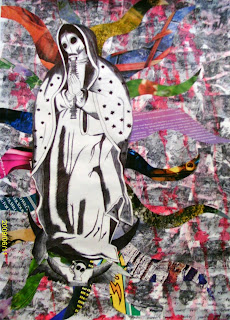 The piece with the Virgen de Guadalupe was created by Julio, he based this piece on the social issue of pollution and the green house effect. He will be entering this piece in an exhibit that our district puts on every year in honor of the Virgen.
The other piece was created by my student Rene. This particular piece evolved quite a bit from the original idea. The writing around his portrait is of a poem that was written by one of the men that is collaged on the background.